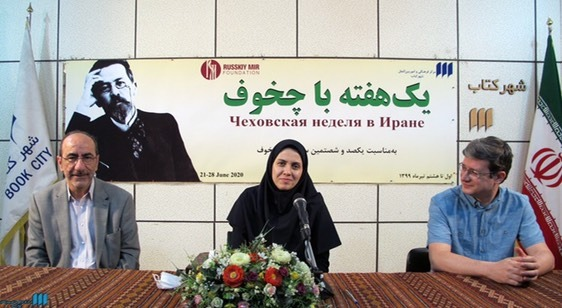 On June 21-28 Chekhov Week was held in Iran. The "Russian Center" of the Tehran University in cooperation with the Shahre-Ketab Institute delivered the Chekhov week in Iran online. On June 21, the opening ceremony took place. Chekhov's connoisseurs enjoyed the opportunity to watch this ceremony online on Instagram at: https://www.instagram.com/bookcitycc/ or bookcityculturalcenter.

The first day of Chekhov's week was dedicated to the Chekhov's cultural innovations. This day the speechs of the Ali Asghar Mohammadikhani (Vice-Rector for International Affairs of the Institute Shahre-Ketab), Zahra Mohammadi (the head of the Russian Center of the Tehran University) and Abtin Golkar (the translator of Russian literature) took place having more than 700 online-audience.

During the Chekhov week, Iranian Chekov scholars, contemporary writers, literary critics, theater workers made many reports. Paper on Chekhov were published daily on the website of the Russian Center and the Shakhre-Ketab Institute. The Center for the Study of IRI, St. Petersburg State University assisted the providers in collaborating with well-known Russian Chekologists such as Andrei Stepanov, Maria Larionova and Igor Pashchenko.